This festival has aimed to introduce a new tourism destination in Palembang. The festival was held for two days, performing several traditional art attractions and fashion shows in the ornamental boats. There was also the inauguration of the River Care Community Office by the Palembang City Government.

The Sekanak Lambidaro River is one of the tributaries of the Musi River in Palembang City. The restoration of the Sekanak Lambidaro River is as flood control in the downtown area and water sources. Besides, pedestrian walk on the river banks will become a new icon for the Palembang communities. The trees will be planted to improve the river environment. The native fish seeds will be released into the river  to support the Ministry of Marine Affairs and Fisheries program to increase or restore native fish stocks to be used sustainably and responsibly.

On this occasion, 10,000 native fish seeds  such as striped catfish, snakehead, and kissing gourami were stocked. The native fish released at Lambidaro Sekanak River was about 7-8 cm long, aiming for the fish seeds to quickly adapt to the new aquatic environment.The seeds were produced by RIIFE’s activities. The Head of RIIFE and Chief of SEAFDEC/IFRDMD, Mr. Zulkarnaen Fahmi explained the fish released is the contribution of RIIFE/MMAF and SEAFDEC/IFRDMD in supporting the preservation of native fish in South Sumatra. He hopes the restocking activity could be done periodically for another retention pond in Palembang City. He conveyed that the fish stocked should not be the introduced fish such as tilapia or other invasive fish because it can harm the aquatic environment, economic value, and human health. In the future, the fish stocked would be able to used by the community and provide economic value.

Furthermore, he informed that in 2021, RIIFE collaborated with PT Refinery Pertamina International Unit III, took part in conserving native fish germplasm. RIIFE  was also  selected in the innovator category of support for technology improvement in commemoration of the 26th National Technology Awakening Day. On that occasion, RIIFE bagged the 2nd Best Award for the Innovative Researcher Category with the theme “Belida Lanjut Lestari (Belari)”. 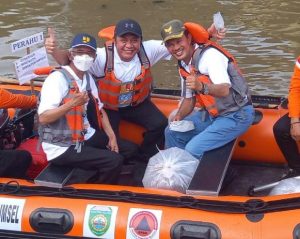 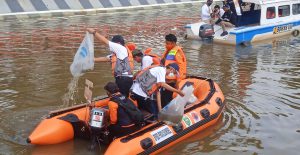